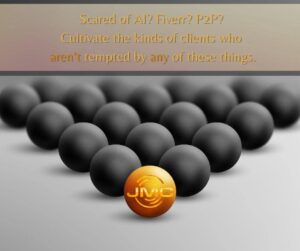 There has been lots of research over the years in the retail and service industries showing that consumers are more likely to post reviews about and share negative experiences than positive ones. The psychology suggests that this comes from a bias towards reporting negative outcomes over positive ones because we tend to simply expect the positive, and feel wounded when those expectations are not met.

Similarly, there has been much written about a similar bias in news media, the, ” If it bleeds it leads,” mantra that negativity gets more eyeballs than positivity. Open any news site, from any perspective, (and let’s be honest, there aren’t many objective ones anymore, are there?,) and you’ll be served heaping portions of what’s wrong with the world today, with perhaps a small side dish of feel-good for balance.

Unfortunately, the voiceover industry is not immune to this phenomenon. Whether in the form of social media, blogs, webinars, or other interactive engagements, we are exposed to a daily barrage of whatever the latest VO outrage may be. Fiverr and P2Ps are fun punching bags. Lately, fear of AI has spread faster than hungry fleas at a dog party. Tomorrow, it will be something new.

Moreover, sorting through VO social media is like navigating a sea of, “Why am I not booking?,” “This client ripped me off,” or, “My agent/manager/Keeper of the Jobs/whatever is screwing me over.” Cream doesn’t rise to the top. What floats in a commode does.

When legitimate, and many of them are, these complaints should never be dismissed…….but, they risk portraying what remains one of the best parts of the entertainment industry in an undeservedly unflattering light. Especially when the noisiest voices are often the ones least invested in the industry in terms of daily client engagement and bookings.

Here’s the actual truth: Not much has changed in the last 5 years or so.

The people who book consistently are still booking consistently. Indeed, many established talent reported 2020 to be the strongest year of their careers, as non-broadcast narration seemed to double in volume and commercial defied expectations and grew in the middle of a pandemic. And many of these same talent are seeing no drop off in 2021 after unprecedented year on year growth. Go ahead…ask any of the pros you know who book regularly what their 2020 looked like compared to 2019. Many have kept quiet what a substantial growth year 2020 was out of respect for those in other industries who were ravaged by the lockdowns, but the bottom line is that VO thrived to the point that agents and managers across the country were hustling to get their on-camera and theater actors trained up in the one side of the business that was still booking. We’ll likely, (and hopefully,) never see a year with that kind of forced growth again, but even just maintaining or slowly growing those gains in 2021 and beyond will take many talent to a whole new place in their career.

Newer talent had a rough ride at the start of the pandemic, but by the end of the summer agents were encouraging submissions and the additional work was starting to spill over. There was and continues to be a flight to familiarity among clients, but there’s more work today than there has ever been, and despite growing numbers entering the field, there are only so many with the requisite natural ability and training to book consistently….and, eventually, many of them do.

Has competition and the dominance of the home studio pushed down commercial rates? Absolutely, especially at the high-end. Local and many regional spots and campaigns remain largely static compared to 5 and 10 years ago, but there’s no question that nationals pay less than 5 years ago, frequently with more versions and lifts attached, and significantly less than 15-20 years ago. Nevertheless, savvy talent have become strong negotiators, and the savviest are making up for anything lost on national rates by feasting on the unprecedented volume of commercial work that new media has introduced. Over time, the very concept of a national commercial will likely fall away into geo-targeted micro-campaigns that may even feature multiple talent reading the same spot and distributed to different parts of the country. Commercial will continue to evolve into a volume game, but those who play the game well will be rewarded for their persistence.

The same is NOT happening in Corporate/Industrial, E-Learning, Explainer, and Medical Narration. Will AI eat some of these jobs? You bet! But there is absolutely no sign of some sort of apocalyptic singularity in which every buyer suddenly embraces Skynet. As with commercial voice over, there is more work out there than quality talent to do it, and those who book continue to book, and in many cases more than ever. Funny thing about busy voices is that they don’t have time to engage in the chattersphere every day, so you just may not hear them as much.

And heavily union and LA/NYC genres like Promo, TV/Documentary Narration, Animation and Video Games are doing just fine, as much of this work continues to be controlled by an iron guard of serious gatekeepers who won’t yield on the rates set by SAG/AFTRA.

If you’re terrified of robots, Fiverr, or P2P, there’s an easy solution: Cultivate the kinds of clients who are not attracted to such outlets. You’ll be surprised to find how many of them are out there.

Folks, the fact is that the voiceover business is doing swell. If that’s not your reality….your best bet might be to spend more time upgrading your performance game, sharpening your auditioning skills, improving your sound, and tuning out the negativity bias that pervades so much of our media.

Will the industry look different in 5 more years? Probably. But chances are it will look far less changed than you might think.