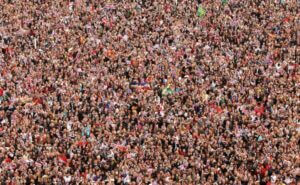 Feels crowded out there, doesn’t it.

In an age where work-from-home has become the rule instead of the exception, where we are experiencing the Great Resignation of people from jobs that treat and pay them poorly, and where on-camera and theater actors went more than a year without consistent work, the voiceover industry seems like the refuge of choice for many looking for a new source of income. Heck, even John McEnroe has gotten in on the trend….kind of.

With voiceover schools and coaches popping up like cicadas after a two-decade slumber, new aspirants are flooding into the field like never before.

By definition, that means there’s less pie for those who are already in the game, right? And those newbies? Good luck!

Well, there’s no doubt that the industry is as competitive as ever, but like with most things in life, there’s more to the story than a simple equation of more people equals less opportunity.

Voiceover is not taxi-driving. With respect to the folks at your local yellow cab company, anyone can learn how to drive and become familiar with their surroundings. With GPS, that last part doesn’t really even matter much anymore, does it? Driving a taxi is honest and hard work, but what it doesn’t require is inherent talent. A spark of creative genius and an actor’s soul is hardly a necessity. Voiceover, however, is a much different beast.

I’d guess that there are probably several hundred thousand people in North America calling themselves voice actors. Sounds like it would be pretty hard to stand out, right? But how many of these people are actually working? Chances are it’s no more than ten thousand, and out of those, maybe only a thousand or two earning anything that looks like a decent living. Indeed, it’s no surprise that when we hear major TV commercials, listen to great storytelling on documentaries, watch our favorite cartoons or play our favorite video games, the voices we are hearing are often the same few dozen people that many of us in the industry have come to know quite well over the years.

This isn’t because it’s a closed club or an old-boy network…..it is because talent and determination rise to the top.

The bottom line is that there are more people trying to do this job than ever before, but in reality it’s one in fifty or fewer that have the requisite skill to make it happen, and of those only one in five who have the business acumen to fulfill their potential. In some ways it’s like the professional poker craze of 15-20 years ago. Millions tried their hand at it, but watch the World Series of Poker and guess what, it’s still the same few dozen sharks and a handful of rising stars at the final tables.

In voiceover, what was true five years ago, ten years ago, and fifteen year ago remains true today: If you have the talent, the drive, the technical savvy and the business sense to make a go of a voiceover career, you may not get rich, but chances are you won’t go hungry either. Phil Ivey isn’t worried about the other people at the table. He’s gonna play his hand, and most of the time, he’s gonna win.