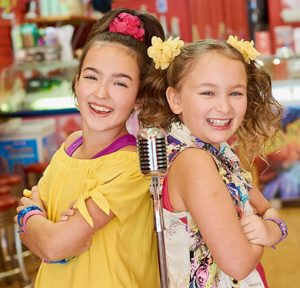 Continuing my profile of some of the industry’s hardest-working talent, today I sit down for a chat with Susan Glow, mom and manager to the amazing Cassie and Sabrina, both multiple Voice Arts Awards nominees in 2019.

How did Cassie and Sabrina get interested in voice acting?

From the time the girls were very young, they were reading, acting out stories, putting on puppet shows, singing, and avidly watching animated movies. By chance when the girls were ages 4 and 6, our family was cast in a Disney commercial for the newly opened “Fantasyland” at the Magic Kingdom. We did a small amount of on-camera work thereafter and the girls took some local acting and improv classes for fun. But once they made the connection that an actor was bringing the characters they were watching in cartoons to life, and there was someone voicing the fun commercials they saw on TV, they wanted to give it a try!

Did you have any background in the industry that helped you become a VO mom?

I knew absolutely nothing about the voiceover industry before becoming a “VO Mom.” My undergraduate degree is in Accounting and my MBA degree is in Marketing. The girls wanted to do voiceover, so I became a VO Mom out of necessity to support their goals. As the girls’ career continued, my background did help me manage the behind-the-scenes logistics and growth of their business.

Describe the process you went through when launching their VO business. Has it been more difficult than you anticipated? Less?

Glow Girls Kid Voiceover was launched from the ground up. We live in Central Florida, which is not a major hub for voiceover work. The talent agencies in the Tampa/Orlando area focus primarily on the Print/Commercial markets and we didn’t know of any resources to help get us started. I did research, studied a lot, and joined discussion groups. I hired coaches to learn about various voiceover genres and the girls took private voiceover classes. I networked and made connections in the industry. We started out with various online casting sites, then moved to regional voiceover-specific talent agents, then eventually earned representation in the LA and NY markets.
Getting started in the voiceover business was more difficult than anticipated. I made a lot of mistakes. Fortunately I made a lot of good decisions too, and connected with a lot of great people. I actually created an online course for parents of aspiring voice talent called “Raising A Voice Actor” to help others navigate the process as they aim to get started in the child voiceover business as well.

What has been their most interesting/exciting role/s so far

The Girls have had the opportunity to work with so many incredible clients!

Cassie’s favorite role of all time was singing “The Socks Song” as “Henriyeti” for Sesame. Henriyeti was such a lovable unabashed character, and the song had such an important message about loving people’s differences told through a metaphor of mismatched socks. Cassie’s most mind-blowing role was her guest role on Disney Channel’s, “Tangled the Series.” On top being her favorite TV show, and on top of being on Disney, her character’s name was “Cassandra” and was referred to by Cassie’s same nickname, “Cass!”

Sabrina’s favorite role was voicing the sassy badger “Beatrice” for Nick Jr’s show “Becca’s Bunch.” Beatrice was sassy, obnoxious, conceited, scheming, and selfish – the opposite of Sabrina in real life and an absolute field day to portray in the booth. Another one of Sabrina’s favorite roles is being the lead voice of “Mila” for the popular YouTube preschool show “Morphle TV” which has now topped over 6.3 million subscribers. It’s so crazy to think that many kids all over the world are listening to her voice!

What type of work do the girls find themselves doing most frequently?

Where do you see their careers going from here?

I’m confident that there won’t be any point in their lives when Cassie and Sabrina won’t be doing voiceover in some capacity. They both love Animation and both aspire to do more Promo work too. Currently, in addition to their ongoing voiceover clients, Cassie and Sabrina are in the process of creating their own animated musical epic story. They are writing an original story, sketching characters, and composing and writing their own original music! The voiceover world has brought some really incredibly creative and generous clients into our lives who encourage and continually inspire the girls. Watching the girls’ creativity and storytelling evolve from their training and experience in the voiceover world has been surprising and wonderful.

For parents with young talent, leave them with one key piece of advice

Shock. Excitement. Stunned silence (which, for the Glow Girls is a rare occurrence) followed by lots of elated screaming! First we learned of Sabrina’s Commercial Demo nomination (screams!) then Cassie’s Toy nomination along with Everett Sundholm (more screams!) and then the girls’ shared nomination for Body of Work (huge screams!) The girls’ voiceover career has truly been a family affair over the years, so it was so special that the whole family was all together when we found out the incredible news. David and I are extremely proud!

For parents with young talent, leave them with one key piece of advice

My best advice for parents with young talent: Make sure your child LOVES voiceover! The voiceover business is fun and exciting. But it is also highly competitive and not something that offers quick rewards or achievement with only a fleeting effort. You hear “no” a lot more than you hear “yes” – that’s just part of the business. So it is important that your child truly loves doing voiceover as a creative pursuit itself, whether he/she books or not. Success in the voiceover world requires time, patience, financial investment, coaching, talent, and practice. Your child has to love it!