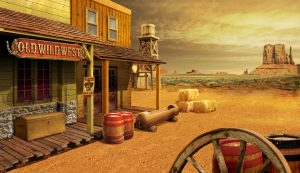 A few weeks ago, Red Dead Redemption 2 was released to the world, featuring the voices of roughly half of our friends and colleagues, (and much congratulations to them for their amazing work.) This Old West-themed video game takes place across a stunning landscape where law and order is more theory than fact, and where those who don’t keep their wits about them often find themselves in a pine box. The VO industry is a bit less cutthroat, thank goodness. We tend to support each other rather than fire our Smith and Wessons into our competitor’s backs, and identifying the guys with the black hats isn’t all that tough. The evolution of voiceover, however, bears a lot of resemblance to a world with few maps, fewer rules, and a lot of fool’s gold.

We’ve been waiting for the better part of a decade for some order to emerge from the chaos. The union took a firm guiding hand and imposed structure on the industry. A major Internet-age player consolidating the online space to create a dominant clearinghouse, hopefully operating on a meritocratic and transparent basis. Someone to lead us out of the wilderness and establish order.

The union remains too focused elsewhere and too sclerotic in its processes, despite the best efforts of some of the leading lights in our industry. It’s been demonstrated that even with millions of dollars, consolidating the online space is too much for any industry company to bite off. And the business is saturated with gurus and messiahs ranging from the truly career-shaping to purveyors of the foulest snake oil, but none of whom have a one-size-fits-all answer for everyone.

The Wild West is Getting Wilder

One gun won’t keep your career safe in the new VO landscape. If all your eggs are in online casting, with a single agent or three, relying on SEO or strictly your own self-marketing, you’re at a disadvantage.

Agents are under pressure due to declining broadcast rates and an over-saturation of talent in the LA & NYC markets in particular. They are still the gatekeepers of the best work, but competition is fierce.

Online casting is morphing into an ever-more-diverse space featuring everything from honest matchmaking-only sites with numerous great jobs to corporate profit centers to start-ups, fly-by-nights, and gig-economy soul traps where you trade your voice for beer money. Figuring which is no easy task, especially if you don’t follow the constant buzz churn on social media. To effectively gain traction through online casting, mastering at least 2-3 sites is essential. No single site will sustain a career. The risk of having your income heavily weighted in a marketplace that may fail, run into reputational/ethical issues, or experience other shocks is to be avoided.

Self-marketing and cold-calling are the answer for many. Still, cold leads, by definition, pan out less frequently than hot leads, and not everyone has the personality or constitution to pick up the phone and sell themselves while experiencing mostly rejection. Cold-call clients can be loyal and lucrative, but it can take dozens of approaches before landing one, and discipline is critical.

The growing number of curatorial-minded buyers forsaking both traditional hiring avenues and online casting is a great source of walk-in work through your website, but SEO is a fine art that usually requires hiring a pro and an investment of time and money.

It’s enough to give a gunslinger fits.

Things aren’t going to change, folks, at least not for the time being. Unless and until the union or a much bigger online beast (think Google, Facebook, Amazon, etc…,) invests the dozens or even hundreds of millions necessary in structuring and dominating the voiceover industry, the West will continue to grow wilder. We’re a friendly lot, but we are playing at survival of the fittest and savviest, and if you want your career to be as strong or stronger five years from now as it is today, it’s time to saddle up and make sure you keep your wits about you. The VO world will only continue to change. Stay diversified. Keep your eyes on 3-5 years down the road. Anticipate what’s next. If you see the whole industry moving one way, see what might be down the opposite road or at least off a side path. Change is the only constant.