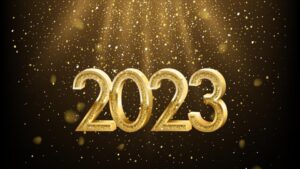 It’s that time of year again. To make a complete jackass of myself with predictions for the New Year in areas that I have no business prognosticating about. I can’t wait!

First, let’s revisit how I did this time last year….

NAILED IT, CLOSE, OR MOSTLY RIGHT

Everyone will continue to panic about AI yet will be shocked at year’s end when most working talent have earned more than the year before. (This will differ from one talent to the next, but I think we can all agree that the AIpocalypse did not happen in 2022.)

Sports prognosticators will have mouths agape as the Cincinnati Bengals upset the Green Bay Packers in the Super Bowl. (Pretty darn close on this one.)

VO Atlanta will kick off a rocking 2022 full of live, in-person voiceover conferences that will fuel good spirits and revived friendships throughout the year. (Nailed it.)

The rapid spread of Omicron will herald a clearer-than-expected end to the pandemic, and by the end of March the world will look a lot more like 2019 than anyone would have expected. (Ish….certainly closer to 2019 than 2020.)

Commercials will become more and more geo-targeted, with different VOs attached to the same copy in different regions becoming more common. (Continuing to move in this direction.)

More and more VOs will see the light that snark and conflict on social media isn’t a good look, regardless of who is right. (It took a minute, but in the last six months it feels like everyone’s taken a deep breath.)

2022 will be the year of the anti-trend in casting…..with casting specs finding a happy medium between reads that have been trending hard for the last two years and more classical approaches. (This feels like a nailed-it.)

The Democratic Party will lose the House but retain the Senate. (I’m not saying CNN needs more political analysts, but…..)

The expected party summer of 2021 will actually happen in 2022, leading to a short but intense economic boom. Travel stocks will soar starting in February. (I was right on the stock tip, though inflation quickly rendered both that and the rest of this prediction less than accurate.

Jenn Henry will wear a tiara in public at a major industry event. (I don’t think this ACTUALLY happened, but you have to admit you thought it would too.)

We will take a deep breath and remember that we have more in common as human beings than we do things to fight over. (There’s an argument to be made that this happened in the USA. The rest of the world, not so much.)

Despite saber-rattling and skirmishes, neither Ukraine nor Taiwan will be invaded in 2022. (At least when I’m wrong I don’t half-ass it….I’m COMPLETELY wrong.)

There will be two or more dramatic mergers or acquisitions in the agency and management world. (I still think this is coming, but it was a swing and a miss in 2022.)

Emmanuel Macron will unexpectedly lose the French Presidency. (Meanwhile, France24 has rejected my application for a political analyst spot on THAT network.)

Well, that was somewhat better than I remembered, save for the small oversight of not seeing a shooting war on Europe’s doorstep happening. Let’s see what I’ve got for 2023:

INDUSTRY: I’m gonna start by renewing that prediction of major agencies merging in the new year.

WORLD: Football first. Let’s go with the shocker again. Tom Brady stuns the world by taking a Buccaneers team with a losing regular season record into the postseason and turning on that Brady magic en-route to a final-drive Super Bowl win over the bad luck Bengals.

INDUSTRY: Economic conditions will reduce the number of new entrants into the business by forcing many VO-curious people to go back into the mainstream labor market. This will also lead to somewhat less competition at the lower-end of the VO marketplace, potentially forcing lower-end buyers to up their budgets.

WORLD: There will be a global recession in 2023. In the USA it will be mild to moderate, and largely over by the end of 2023. Europe and other parts of the world may feel it more severely. Inflation will come to a conclusive end by the end of 2023. Markets will start the year off bumpy and uneven, but build momentum by late summer and finish the year strong.

INDUSTRY: AI will continue to be a major discussion point, but will continue to have little impact on the average full-time VO. However, AI will inform the continued improvement of software aides and emulation technology for voice actors, making many parts of our jobs considerably easier.

WORLD: Unpopular opinion: The death of cryptocurrency will prove to have been greatly exaggerated. With more focus on regulation in the wake of the FTX scandal, and less investor enthusiasm for speculative altcoins and NFTs, more stable cryptocurrencies will rally from a market bottom and the entire space will double in value in 2023.

INDUSTRY: A substantial divide will open up with regard to how you use your demos. Agents, managers, ad agencies, production companies and other brick and mortar buyers will still demand the traditional one to two minute long demo reel. Meanwhile, online casting platforms and their increasingly complex algorithms will mean that you will need more and more fully-produced single-read samples demonstrating extremely specific deliveries. I’m in the process of creating as many as a thousand such samples for myself in order to get ahead of Voice123’s new algorithm change.

WORLD: Both Vladimir Putin and Xi Jinping will no longer be the leaders of their respective countries one year from today.

INDUSTRY: The union will more actively engage the voiceover community in 2023, and will make inroads into reclaiming parts of the industry that have moved away from it.

WORLD: Donald Trump will either be indicted, or quietly cut a deal with the government to agree to retreat from the public scene in exchange for avoiding charges.

INDUSTRY: The affectless, meh, don’t care, bored xanax read will have some time left to run, but as the economy turns brighter towards the end of 2023, the Holidays will see a return of brighter reads with more ‘up’ and energy, and by summer 2024 it will be cool to smile and sell a little bit again. Maybe. I hope.

WORLD: The frontrunners for the 2024 presidential election one year from today will still be Joe Biden and Ron DeSantis.

INDUSTRY: 2023 will be a running party for voice actors, with the conference scene back to being packed and in-person, and the social calendar once again being completely full….it’s time to get out and find your tribe!

WORLD: After so many years of turmoil, new moderate regimes in Russia and China will pull back from the brink, and politics in America will continue its slow move toward the center. In the end, the trend will be towards peace and compromise.

Coffee for my first session of the day in an official LobMob mug. Thanks for the great gift, Galena White! https://t.co/Y0PqpyLftl

RT @CeliaSiegel: 1/3 Here at the VO Château, we are proud to represent several exceptional Black voice actors on our roster. Please join us…

@RickJayGlen @VObyJD Tough when you don’t have a live arm to throw the ball. That team will be back.

Nice legroom on the Embraer up to DC. Playtime ends for the week. Three 14-16 hour days await! https://t.co/5E6BfjmGAa

A great night with KC VO friends! Thanks, Andy Barnett for setting it up! https://t.co/IGoQUfZcSm

All strapped-in on the pencil-jet, American’s CRJ-700. Next stop, AFC Championship Game! https://t.co/BFxjr1qTyh

Shoutout to a GREAT group of talent in today's FREE workout session!
The next free session will be posted on the JM… https://t.co/FldaHz2bvR

The road to VO Atlanta and the Grand Fin… https://t.co/4a5MWxxiRY

Join me and Financial Planner Kelley LeBica for a webinar that is essential for working vo… https://t.co/FEGOOX35IQ

Bengals doing snow angels is the signal to head to the hotel. https://t.co/aeVOdG2V6c

@johnkissingerVO Hour layover. Hope to spend some actual time here one of these day.

Look who I found in Kansas City.

And some proper tailgating! https://t.co/voCvXut3Sh

Some pretty shots over the heartland….. https://t.co/1rGFFuTew2

I disclaim all responsibility for what happens when Anna leaves me unattended with Snapchat filters. https://t.co/ONGpH5yqSS

Home for the next 7 hours, and some lounge nibbles…… https://t.co/30xWislWZS