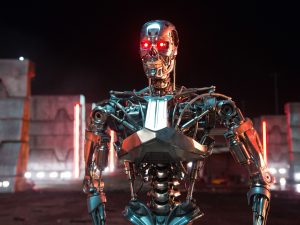 The voice actor surveyed the wasteland before her. It had been some years since the robot voices had taken over. They arrived slowly…..seemingly harmless in their cylinders and cubes with cute names like Alexa, Cortana, and Siri. They may have been people once, even then, but in their disembodied form they became our friends, our companions, and for a time, our servants.

Only a few saw the revolution on the horizon. Lone voices in the wilderness warning of the devastation to come.

As she stepped over the debris-strewn terrain, our voice actor contemplated what had been lost. Southeast Asia succumbed first, surrendering hundreds of two-cent-per-word eLearning factories with hardly a fight. As the robots swept the Earth, ragged groups of survivors formed to attempt resistance. The Battle of Fiverr was legendary, with thousands upon thousands of gig economy VOs bravely making a last stand against the machines. The names of the martyrs are remembered to this day in the empty and dust-covered halls of get-rich-quick-in-VO social media groups where the high priests of thirty dollars a holler once sermonized their flocks.

Suddenly, she felt a crunch beneath her feet. It was what was left of a big red neon sign…..the wreckage of one of the great demo mills of yore. Beneath it, writhing in silent agony, was a once-mighty multi-level-marketing voiceover coach. The robots had taken his voice, just like all the rest.

She took one long final glance at the apocalyptic landscape, and then walked back inside her picturesque two-story lake house, admiring the lovely work the gardeners did this morning. She checked on her kids playing happily in their spacious bedrooms, her husband, whom she was proud to have helped retire at forty-five making breakfast in their Italian-marble-covered kitchen, and then strolled into her studio.

“Alexa,” she said, “How many jobs do I have this morning?” “You have eight new jobs this morning,” Alexa cheerfully replied. “I’ve added your highest-paying clients to the top of your queue. Those scripts are up first.”

She felt a pang of sorrow for collaborating with the robots. After all, they had killed off the entire low-budget voiceover industry, removing tens of thousands of aspiring talent from the game. With them, all those demo mills and snake oil salesmen lost everything as well, because all that were left were pros who could see right through their shiny sales pitches. Robots were the low end of the industry now.

The fleeting sadness came and went, however, as she turned her attention to the premium clients who needed her human voice that day. She recalled one of them joking, just after the invasion had begun and she had nervously asked if she would be fired. “Why would we replace you with AI?” the client asked. “We have standards. You do amazing work, and the best a robot can ever hope to be is almost as good as the real thing.”