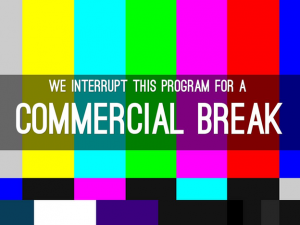 I had an interesting epiphany the other day on the decline of commercial voiceover. After booking a big-brand commercial client through a website walk-in, I took stock of my daily rake: One fantastic commercial client and a smaller one. Three Corporate Narration jobs. One new E-Learning client and a repeat from a steady customer. One stray Telephony job. Guess what got me excited? Hint: It wasn’t the big commercial win. I’ll do a few spots for them at a fair rate, and then, like most commercial clients in today’s marketplace, they will probably move on. However, one of those three Corporates will likely become a weekly customer for the next few years. And the E-Learning client has the potential to add tens of thousands of words of narration to my invoice list each year for the foreseeable future.

A sexy new commercial client would have made my week even a few years ago. Having a chest-thumping brand to add to the client list and a sharp spot or five for your portfolio later on was always a signature score. The ego stroke is still nice, but the commercial voiceover business remains in deep flux and substantially declines.

Shifts in media consumption habits, a reflexive aversion to advertising among young people, and a technology-driven increase in the supply of quality voice actors, (most of whom are attracted to the glitz of hearing their voices on air,) have lead to a massive change in the market. Ads are now more targeted, meaning smaller audiences, generally lower budgets, and less ROI. The days of being the “voice of” for years, or even a year, are rapidly ending as commercial buyers constantly react to the latest metrics with new ad concepts. The supply of great commercial voice actors, once limited to LA and New York, is now plentiful and armed with professional  home studios that sound as good as the best storefront locations. Commercial buyers have choices, and in most cases find themselves with substantial power to dictate pay.

If you’re waiting for my usual silver lining, you’re going to be disappointed. While I strongly suspect commercial rates have hit a floor, things aren’t going back to the good old days. As much as we fight the trend, the inevitable result of a supply/demand imbalance in favor of those on the demand side is that those on the supply side have to adapt and innovate. Commercial buyers will continue to move away from high-cost models wherever they can get away with it. Most will not compromise quality to save a buck, but they WILL look for a middle ground. The union, agents, talent managers, and casting directors are under more pressure than ever before because of this. Many of the traditional commercial VO gatekeepers, while touting their remaining high-profile clients and trying to put on a smile in public, are privately worrying about how long they will be able to keep the doors open. In recent months we have seen a slew of castings from very well-respected sources that five years ago would have been rejected out of hand for the rates offered. Multiple cut downs with little or no extra pay. Long cycles or even buyouts. Occasionally exclusivity without reasonable compensation. The writing is on the wall.

Like all market changes, this isn’t the end of the world, but rather perhaps simply the end of A world, or an era. The future of commercial is likely to be less pay but higher volume. New media means that while the audience and budgets are smaller, there is more actual content than ever before. Advertisers are becoming more clever with regard to creating content that doesn’t scare off younger consumers with hard sells. The content itself is becoming edgier, more authentic, and fun to voice.

Moreover, future-forward talent are embracing the industry’s growth sectors, like E-Learning, Corporate and Explainer Narration, Medical Narration, Political Commercial, Animation and Video Games. The non-broadcast genres listed here require highly-competent, focused, and disciplined voice actors, and the demand in these genres far outstrips the supply, which means pay is rising and talent hold the advantage in negotiations. The same applies for Political Commercial VO, while Animation continues to be a high-dollar holy grail of union work, though with more competition. Video Games, despite middling pay, are launching pads for talent brands which can lead to rapid career growth, and they are the cultural touchstones for millions of young consumers, meaning top actors may be able to garner bigger paydays for commercial work in the future if they establish themselves as influencers.

The question is, how will you build your career? It’s easy to complain about market forces reducing what had long been one of the industry’s cash cow glamor genres to a volume-oriented hustle. However, the wiser course is to adapt and thrive in the new normal while maintaining reasonable standards, and pivoting to embrace the sectors of the industry that the next generation of top voiceover earners will arise from.