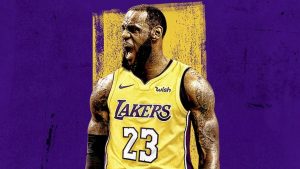 Some say LeBron James is the greatest basketball player of all time. I’m more of a Jordan guy myself, but time will tell. There’s no denying, however, that LeBron is one of the most formidable athletes ever to play any sport. He’s a master at his craft, excelling in almost all areas of the game, and while he doesn’t always come out on top, he certainly does so frequently enough. As voiceover artists, we need to audition like LeBron.

One thing is certain: When LeBron takes a shot, whether he makes it or misses it, the attempt itself is the result of a calculated series of choices all leading to an effort to achieve a result. With rare exceptions, LeBron doesn’t fire off a ball hoping for the best……he believes that as a result of practice, training, and strategic analysis of the situation that any shot he takes has a chance to end in a score.

As a voice actor, are you playing like LeBron? Or are you shooting wildly, hoping something will go in the net?

I’m a big believer in the numbers game for most VO talent…..you do have to present yourself to as many potential buyers as possible in order to find the ones who are interested in your sound. Nevertheless, I always get concerned when I see a talent post, “I hope I book this audition.” Hope should never enter into the equation. Regardless of whether you are doing five auditions a day or fifty, each one should reflect a calculated choice to make an effort that has a realistic opportunity to lead to a positive outcome.

What does this mean?

It means you need to be honest about your strengths and weaknesses. You should train as much as possible to turn weaknesses into strengths, but also accept and understand that not every amazing horse is cut out to be a great duck. I am blessed to be fairly versatile as a VO, but if I start seeing direction points telling me that the buyer wants an 18-25-year-old sound I generally don’t make the effort to audition, because even though I’m confident in my ability to nail the read itself, I know that I’m throwing up a wild heave from half-court hoping for the best…..with little expectation of success.

Know who you are as a voice actor. If you have pipes like Don LaFontaine but that’s where you stay then explainer videos are probably not going to be for you. If you’ve got a slick and polished sound but have trouble dropping your guard and getting a little crazy then maybe video games aren’t your bag. If you sound like the girl next door but struggle with nine-syllable words and large blocks of text, medical narration might not be your thing. Get coaching, sure, but also realize that you don’t have to be a jack of all trades in this business. Find what you do well, and become a master. Like LeBron.