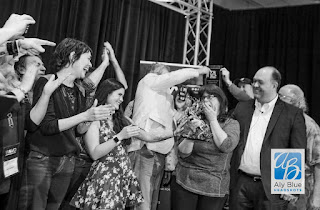 For the third year in a row, I had the privilege of attending and presenting at VO Atlanta. The past two years have been content and information-packed events that lifted the industry and brought the community closer together. Gerald Griffith and the team that made this event happen raised the bar even higher in 2017, so here is your VO Atlanta recap!

The content speaks for itself. With a lineup of presenters featuring dozens of the industry’s leading lights, 8 separate training tracks, a youth program, a Spanish program, and a plethora of optional value-added X-sessions, not only was there something for everyone, there were full days of learning for anyone who attended, regardless of what their particular niche or specialty was. Add to this the included meals, constant giveaways, and opportunities to connect with people who might advance your career, and VO Atlanta 2017 was a stunning success by any objective measure.

However, the intangible side of things makes VO Atlanta truly special. The voiceover community is unique in the entertainment world in its selfless and unpretentious love of one another and commitment to giving back. Petty jealousies and gossip that define so many other performance industries don’t seem to have penetrated those who live behind the mic and away from the camera. The discussion of community, mutual support, and spirit of sharing what many would consider being valuable secrets aren’t just matters of lip service in our industry. They are the way voice actors live their lives. Perhaps this is born of the blessing of abundance, the collective gratitude that comes from working in a field where those with talent will not run out of opportunities, but it is nevertheless a testament to the character of our colleagues and friends.

The buzz began as early as Wednesday, as voice actors from around the world converged on the Atlanta Airport Marriott, the staff of which likely had no idea what they were in for. The din that began more than 24 hours before opening ceremonies was but a preview of what would essentially become a 5-day rolling party spread throughout the public areas of the hotel, with singing, dancing, drinking and eating both planned and spontaneous turning a sleepy airport conference hotel into a funhouse to rival any nightclub. Through it all, one thing was clear: Here, there were no social classes, no stars separated from fans, no nervousness on the part of new talent engaging with industry leaders…..here, there were just friends.

What did I learn at VO Atlanta 2017? Unfortunately, I didn’t have much chance to take in a lot of the incredibly valuable content, as I spent the weekend busy with presentations and social engagements….but I learned a few things nonetheless. I learned that people love baby pictures, that the British can drink anyone under the table and somehow remain both standing and able to have a witty and intelligent conversation…..I learned the origin story of the name ‘Gravy for the Brain’…..I learned that when Joe Cip wants to share a Martini, the only answer is yes. And, not drinking much more might have saved me from the official conference virus…..I learned to be glad not to have to follow the irrepressible Scott Parkin on stage at any time….and how committed Gerald Griffith is to making talent understand the importance of the business. I learned that in my future X-sessions I’ll warn people not to wear shorts and to bring a winter coat….and that online casting sites can be loved by voice actors when they take the time to love us back. I learned that Armin is still a rockstar, right down to the stray F-bomb…..and that the A/V team are the ones who really make everything come together. I learned a great deal from my colleagues on the eLearning panel, and hope I offered a worthy contribution….and that Paul Stefano is not Peter or Mary. I learned that sushi sometimes takes two hours to prepare, that a real friend will help it find its way to you nonetheless, and that people care about ethics in voiceover. And, on Sunday, I learned that when well-meaning people come together, life can be changed, and an industry can elevate one of its own in the spirit of thanks and love.

I hope you learned as much as I did at VO Atlanta 2017, and I look forward to seeing you all again next March.