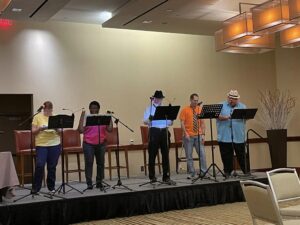 I didn’t want to go downstairs. It was my privilege to attend Val Kelly’s Mid Atlantic Voiceover Conference, MAVO, this weekend. Best part for me? Not my event. I had exactly ONE breakout session, on political VO, on my schedule to present. I showed up at the venue around noon on Friday and by 3PM I was somewhere I almost never visit during a conference…..the hotel bar. My good friends Brad Hyland, Patrick Kirchner, and Cliff Zellman joined as we threw back a few cold ones and cut up like the knuckleheads we are. We met a married couple there for a hotel date. The guy was a new retiree and aspiring podcaster. Great conversation, and pure relaxation.

Things progressed to the hotel restaurant where a pack of VO goombahs including Yours Truly, MAVO Keynote Marc Graue, Cliff again, Brad again, Tom Dheere, Johnny Heller, Uncle Roy, and Scott Parkin had a boisterous and very rushed dinner before the speaker introduction session. At one point Parkin threatened the life of an infant with a set of cutlery. There was more beer.

Speaker intros were wild. Great energy, fun room, all of the insanity of the aforementioned dinner bunch with an Elley Ray hand grenade thrown on top. And congrats to her on the MAVO Muse Award for all her contributions to the industry. After intros a number of us went to, let’s just say, a private room, where more libations flowed freely and conversations were on the unfiltered side. It was nice.

Downstairs, a bit later, a radio play had commenced on the main stage, engineered by Uncle Roy and Holly Adams. Now, most of the time, at conferences, that’s where I would have been. I’m generally not one to disappear to the private parties. I like being with the masses and meeting my fellow VOs. I thrive on the energy of these events.

But not this time. This time I wanted to do exactly what I was doing. Sitting in a comfy chair in a rowdy room with a few good friends and now well-into a bottle of Glenfiddich, (Parkin again.) Mellow. Relaxed. Slightly inebriated.

After a time, the ever-responsible and always-thoughtful Johnny Heller suggested we should make an appearance downstairs at the radio play. I resisted. By which I mean I suggested he was out of his gourd and that we were best situated exactly where we were. Did I mention the Glenfiddich? I thought I had won the room, but slowly the party people headed downstairs. I didn’t want to go downstairs.

What awaited us back on the main stage was something genuinely special. Four people I know well, Carman Wilson, Jason Thomsen, Pat Kennedy, and Jim Fronk, all coaching and demo clients at one point or another, (Carman Wilson has a One Voice Award for her effort,) and a fifth guy called Greg whom I don’t know as well but who was doing a helluva job getting into his role as a detective…..were putting on a straight-up show. Five voice actors at various points in their journey, but who in that moment owned the stage in front of a collection of some of the biggest names in the business. For half an hour I watched as they got laugh after laugh from the crowd, with impeccable comic timing, not once fumbling a line despite being on a big stage under bright lights in front of their peers. They were brilliant. They were funny. And they represented everything that’s right with this business.

At a time where there’s more acrimony in our industry than most of us care to see, watching this group onstage helped me put things in perspective.

There may be more arguments in our industry than there used to be. Is AI a nothingburger or the VOpocalypse? Do you love VO award shows or hate them? Are those preaching work/life balance right, or are the hustle-and-grind advocates on the correct track? Are P2P sites the devil or just a tool in a toolbox?

What matters in this industry are Carman Wilson, Jim Fronk, Jason Thomsen, Pat Kennedy, and Greg the Detective. They’re living it. They’re breathing it. They are pouring every ounce of their heart and soul into making themselves the best at this craft as they can be. Will they all make this into the dream career so many want it to be? Maybe, maybe not. But I wouldn’t bet against any of them, and I wouldn’t bet against this industry continuing to thrive and grow because of people like these.