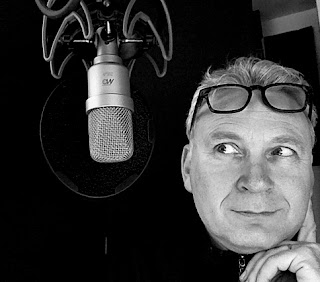 Today I interview Paul Strikwerda, voice actor, respected blogger, and a frequent commentator on ethics issues in our industry. Paul will be appearing on my Ethics in Voiceover panel at VO Atlanta 2017.

JMC: Tell us about how voiceover became a career for you.

PAUL: When I was seventeen, one of the public networks in the Netherlands picked me to produce and present radio and television programs by and for teenagers. A week after I got hired, I recorded a promo for my show. It was my very first voice-over. Fast forward thirty six-years, and I’m still in studios talking to invisible people as a disembodied voice. It’s weird, but very rewarding!

JMC: You are very well known as a blogger and thought leader in the industry. What inspired you to take on this role?

PAUL: Writing has always been something I very much enjoy. When I came to the United States at the end of 1999, I needed an affordable and effective way to introduce myself to clients and colleagues. Blogging seemed to be the best way to boost my business. With close to 38,000 subscribers, I have a feeling that it’s working!

By the way, I never set out to become a thought leader. I did notice that as a European I bring a different perspective to the table. Every week I try my best to be informative and entertaining, and sometimes I push the envelope a little bit. Why? I think it’s the job of a voice-over to be outspoken.

I care a great deal about my community. My blog is also a way for me to give back, by helping people become more professional, and more empowered as a person, and as a freelancer.

JMC: Tell us about one job you are particularly proud of.

PAUL: A few months ago, I recorded a romantic mini movie called “The Tale of Kat and Dog,” (https://youtu.be/VVhFOOl0ovo) for the Holland Marketing Alliance. In it, I voice an adorable little dog, taking an American girl on an unexpected tour of Amsterdam. Even though I‘m now a U.S. citizen, I’m really proud to promote the country that means so much to me in such a fun, lighthearted way. In my next life, I want to come back as that dog!

JMC: What one piece of advice would you offer anyone starting out in voiceover?

PAUL: Funny you should ask. I just blogged about it last week. My advice has to do with carving out a niche. I always tell my readers and my students:

Find something that defines you but does not limit you.

In other words, you want to box yourself in to emphasize what sets you apart, but you want that box to be big enough to attract a wide audience. If you try to be everything to everyone, you end up being nothing to no one.

PAUL: In short, ethics are moral principles that shape our lives; beliefs about right and wrong. These beliefs guide our decisions and help us make choices based on what we think is important and good for us, and for society.

In the context of voice-overs, a common ethical dilemma is a choice between money and morals.

For instance, would you record a political campaign ad for a candidate whose ideas you do not share just because it pays well? Would you voice a pro-life video, even if you’re pro-choice?

Would you align yourself with a company that rips voice-overs off by asking you to do more and more for less and less? Is it ethical to undercut the competition by working for a bargain basement rate?

These are essential questions rarely discussed, and I can’t wait to weigh in on these issues in Atlanta!