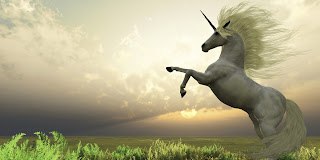 I was thrilled this past week to land a pretty high profile national TV spot involving a three-letter network, a major prime time TV series, and a blockbuster movie release from the mouse ear people. Indeed, I dropped a short post on social media telling everyone where and when to tune in. Not surprisingly, there were some congratulatory posts. Hopefully they won’t replace me between now and the scheduled airing!

What caught me a little off guard, however, was the level of excitement and enthusiasm among my friends and colleagues over this booking, which while high profile, is a one-off spot that did not involve a life-changing addition to my bank account. It was a humbling and gratifying expression of good will from people I’m proud to call friends, but it seemed a bit much.

A good friend in the business explained it thusly; “That’s a unicorn job.”

Which got me thinking.

You see, this job was, in my mind, by no means the most important addition to my client portfolio last week. That honor went to a far less glamorous company working on a Siri-like process for adding audio to videos car dealers post on automotive resale sites. Not a sexy gig, by any stretch, especially when considering the first job involved creating over two thousand separate one sentence files. Nevertheless, the first project alone was worth far more than a one-airing national spot, and the likely future work may well lead to a 2016 that exceeds my annual target.

“Why is JMC bragging about all this,” you may ask?

Well, the backstory is a necessary part of a larger theme.

Something that stuck with me from my conversations with Gerald Griffith, founder of VO Atlanta, during this year’s event, was his comment over breakfast about how the business mentality of talent affected his signup rate for the private X-sessions the conference offers with presenters. “It’s amazing how every year, the performance sessions fill up immediately, and anything involving business struggles to get more than eight or nine people.”

One casting director at VO Atlanta sold out TWO X-sessions. The character workshops? Full. Automotive? Full. Anything with agents? Get there early! However, if it involved numbers, tech, strategy and systems, fuhgeddaboutit. Like a fancy restaurant with a very public rat problem, you could get a seat anytime you like.

Which makes one wonder if the focus of the industry is perhaps a bit too concentrated on that which is shiny and fun, at the expense of growing our businesses in ways that will sustain a livelihood for the long run.

I often get asked why I’m not in LA, where all the high profile work is. Aside from simple lifestyle tastes and choices, the truth is that I’ve never been all that excited about, “Being the voice of X.” A fair number of those gigs have found me over the years, which is a great blessing, but my business is built on a foundation of steady mid to low-profile clients who come back over and over again with regular work of the sort that would get about three likes on Facebook, (and those from immediate family only.) It’s why I get more excited about an order for two thousand one sentence files than I do about a quick high profile national spot. Six months from now, I’ll be sending the first of those two another invoice, while Mickey will have moved on to the flavor of the moment.

Unicorn jobs? If one trots by, I’ll hop on and ride it for as long as it will let me. Otherwise, I’ll take methodically growing my business over the thrill of the chase.

Previous PostRecap of The Midwest Voiceover Conference: Mo...
Next PostProgress at VO ATLANTA 2016